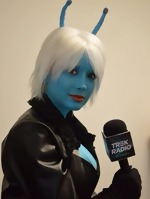 I've temporarily taken down all of my best "Star Trek" stories from Fanfic.net, to edit and re-upload to another account. Oct 24, 2021